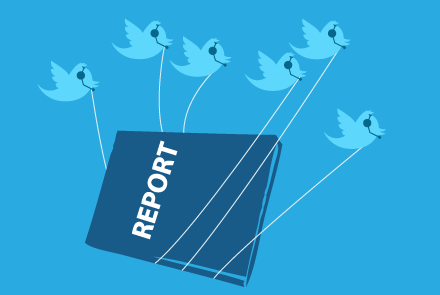 What were my findings?

I ran an analysis of every tweet that used either the #CCTR hashtag or #CUSTSERV hashtag. I then further divided the results to only look at the statistics for #CCTR. So this article and analysis will only cover people, brands and tweets that used the #CCTR hashtag.

The most activity was 227 tweets on the second Wednesday, September 11th. Activity drops 60% – 85% on Saturdays. Thursdays were the most active days of the week except for during the 2nd week. Sunday was typically the least active day of the week, followed by Saturday. During the week Mondays and Tuesdays tended to have low activity.

Impressions were also the lowest on the weekend. This is most likely due to low tweeting activity. For example, the tweet that received the 6th most impressions was sent on Saturday the 28th by Intradiem.

You may want to test sending your most important tweets during low traffic activity days, such as the weekend and beginning of the work week. There might be fewer eyeballs on Twitter, but you may also have less competition for those eyeballs.

@stealeyreed has a multiplier of 1.88x, meaning that for every 10 impressions she receives from her followers, she receives an additional 8-9 impressions from retweets, replies and mentions.

Most Likely to Impress

Most Likely to be Retweeted

@McGeeSmith tweets were retweeted 81% of the time. She received 36 retweets from 44 tweets.

How To Read The Influencer Data

The following influencers and brands are not in order of rank or importance. I do not believe there is enough data to accurately rank people and everyone on this list is worth noting.

“Tweets” is the number of tweets the person/brand tweeted during September with either the #CCTR or #CUSTSERV hashtag. “Impressions” is how many impressions the person/brand received from their tweets. In Flavio’s case, he received 18,945,799 impressions from 600 tweets that included either #CCTR or #CUSTSERV. That 18 million sounds like a lot at first, but it is really just the number of followers times Flavio’s 600 tweets, the most tweeted by anyone in September.

“Total Exposure” is the total impressions from all tweets, retweets, replies and mentions that included either #CCTR or #CUSTSERV. The delta, or Total Exposure minus Impressions, gives the number of additional impressions gained from retweets, replies and mentions. Delta/retweets is the delta divided by retweets. Flavio had a total exposure of 22,275,483. When we subtract his original impressions we get a delta of 3,329,684. When we divide the delta by Flavio’s 428 retweets we get 7,780. This means Flavio gets an average of 7,780 impressions per retweet. 7,780 is the second-highest number of impressions per retweet, which tells me Flavio has one of the strongest engaged audiences.

Most Likely to Impress

@Intradiem had a multiplier of 3.61x, meaning Intradiem receives an additional 3.61 impressions from retweets, replies and mentions for every impression they receive from their own tweets.

@Zendesk is by the most popular brand with 47,987 followers. The high following and active use of the #CCTR and #CUSTSERV provides Zendesk the most impressions, retweets and exposure.

@inContact was the most active in September with 179 #CCTR and #CUSTSERV tweets.

I hope you found this article insightful and helpful. I hope to do a similar analysis each month and provide you with a snapshot of the call center industry twitter chatter.

What additional information would you like included in the next month’s edition?

This article consisted of just a small portion of my analysis. Feel free to comment or email me if you have a question on a particular person, brand or metric.